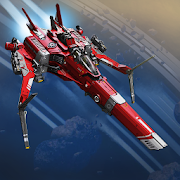 Control your ships in exciting real-time 4v4 Sci-Fi combat that stays true to the traditions of the genre, allowing you to actively target the enemy with your ship’s special abilities.